This project shows how to model NASA’s HL-20 lifting body with Simulink®, Stateflow® and Aerospace Blockset™ software. The vehicle model includes the aerodynamics, control logic, fault management systems (FDIR), and engine controls (FADEC). It also includes effects of the environment, such as wind profiles for the landing phase. The entire model simulates approach and landing flight phases using an auto-landing controller. To analyze the effects of actuator failures and wind gust variation on the stability of the vehicle, use the «Run Failure Analysis in Parallel» project shortcut. If Parallel Computing Toolbox™ is installed, the analysis is run in parallel. If Parallel Computing Toolbox™ is not installed, the analysis is run in serial. Visualization for this model is done via an interface to FlightGear, an open source flight simulator package. If the FlightGear interface is unavailable, you can simulate the model by closing the loop using the alternative data sources provided in the Variant block. In this block, you can choose a previously saved data file, a Signal Editor block, or a set of constant values. This example requires Control System Toolbox™.

For more information on the FlightGear interface, read these documentation topics:

For a more detailed description of this model components, view a recorded navigation through the model using this link:

The HL-20, also known as personnel launch system (PLS), is a lifting body re-entry vehicle that was designed to complement the Space Shuttle orbiter. Designed to carry up to ten people and very little cargo[1], the HL-20 lifting body was to be placed in orbit either launched vertically via booster rockets or transported in the payload bay of the Space Shuttle orbiter. HL-20 lifting body was designed to have a powered deorbiting accomplished with an onboard propulsion system while its reentry was to be nose-first, horizontal and unpowered.

The HL-20 lifting body was developed as a low cost solution for getting to and from low Earth orbit. The proposed benefits of the HL-20 were reduced operating costs due to rapid turnaround between landing and launch, improved flight safety, and ability to land conventionally on runways. Potential scenarios for the HL-20 were orbital rescue of stranded astronauts, International Space Station crew exchange if the Space Shuttle orbiter was not available, observation missions, and satellite servicing missions.

Run the following command to create and open a working copy of the project files for this example. 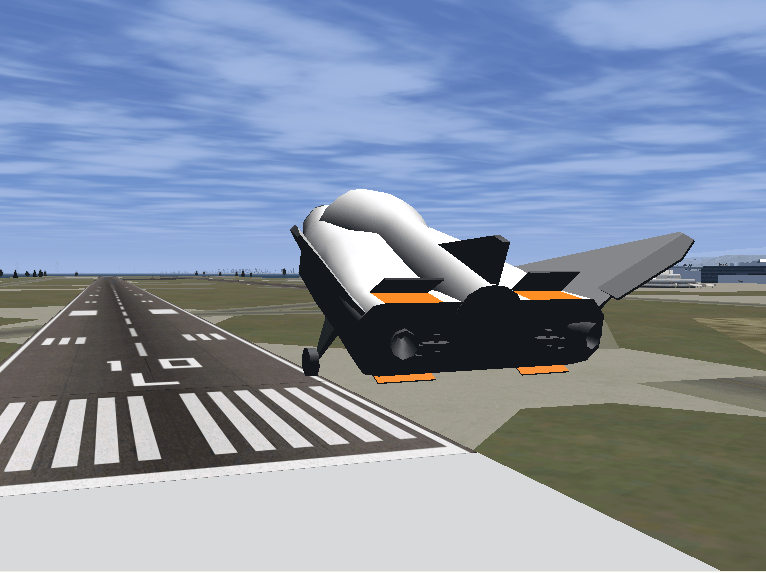 For more information on using Simulink Projects and HL-20, see: